If you read my guide to Munich last week (and you should because it’s such a lovely city to visit) then you will have seen we stayed at the most fantastic family friendly hotel in the beautiful Nymphenburg district. But it wasn’t enough to just mention the hotel briefly in that post – it was such a wonderful place to stay that it gets a whole post of its own!

Hotel Laimer Hof ticked all the boxes in what I look for in accommodation when travelling. Located in a quiet and pretty residential area of the city but still only a 10 minute tram ride out of the centre, it’s a traditional looking building with turrets making it look a bit like a small castle. Always important to be wowed by a place as well as feeling like a princess! With the atmosphere of a small intimate guest house rather than a big impersonal hotel and a heap of authentic Bavarian charm, they cater extremely well for families here making it one of the most family friendly accommodations in Munich.

The majority of the rooms here are double rooms or family rooms which are nice and spacey with a romantic cosy feel plus all the basic amenities you could need in a hotel room. But we were lucky enough to be given THE most amazing apartment to stay in which couldn’t have been any more perfectly suited to Evie and me. The apartment was huge – so big it could easily have been someone’s home – which meant that my little explorer had plenty of room to practice her new walking skills as she had just started walking on her own the day before our trip began.

We had a lovely modern kitchen surrounded by the most beautiful stained glass windows, with everything we could possibly have needed, a large wooden dining table, and the staff were kind enough to bring a highchair up to our room for Evie.

This was absolutely brilliant for us as it meant I could make dinner in the apartment (or get a take away from the pizza shop around the corner when I couldn’t be bothered to cook), rather than eating out every night – a lot more budget friendly and convenient when travelling alone with a toddler.

The bathroom had a shower as well as a separate bath which also suited us really well as most modern hotel rooms only have showers so Evie was ecstatic to be able to splash about in the big bath for the first time during our trip.

The bedroom had a large comfy double bed with some sweet treats left on our pillows which of course Evie promptly sought out. Although I was perfectly happy to share my bed with her she didn’t seem quite as keen to share her sweets with me.

The great thing about having a separate lounge area is that once Evie was in bed at night I could then relax and enjoy the rest of my evening. Getting comfy in one of the cosy armchairs, it was easy to switch off and watch TV or read a book (or more likely scroll through Instagram) without worrying about having the lights on, being noisy and waking her up which is what often happens when we’re in most standard hotel rooms.

The location of Hotel Laimer Hof was one of the biggest draws for me and the area ended up being my favourite part of Munich. I loved it so much here with its adorably cute houses with colourful front doors, bicycles leaning against lampposts, and people with friendly welcoming smiles as Evie and I walked by. If I was to live in Munich this neighbourhood would definitely be the place I’d go! 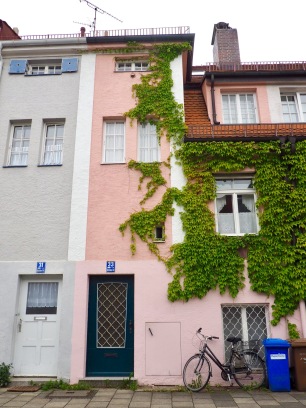 A brief stroll around the corner is the beautiful Nymphenburg Palace which we visited a couple of times. My favourite time of day was early in the morning before we’d had breakfast and before the hordes of tourists descended. Usually I’d never be up and about by 7am but when your one year old wakes you up at ridiculous o clock what else are we to do but go exploring! 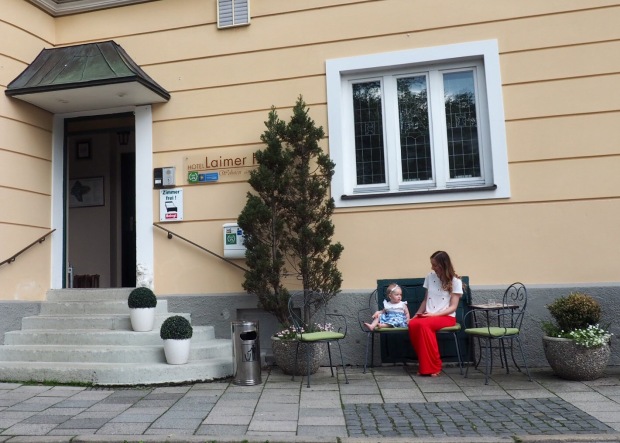 With only the swans and ducks for company and the occasional cyclist or jogger out for a morning run, it was so peaceful and tranquil – apart from Evie’s excited shrieks at seeing the baby ducks waddling about which she then waddled after with her newly walking feet!

A few minutes in the opposite direction is Hirschtgarten, a brilliantly family friendly park and beer garden with a children’s playground, deer to feed, live bands playing music, stalls selling traditional German fare and, of course, lots of beer in the biggest ever glasses. 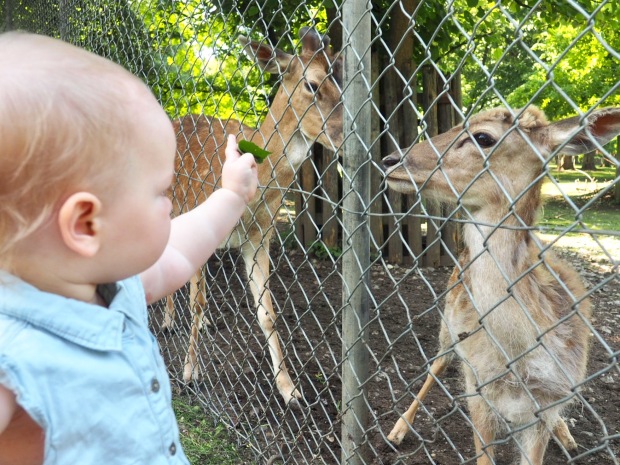 After our morning wanderings around the palace or the park, we headed back to the hotel for breakfast in the intimate dining room which had lots of choice for both Evie and I from cereal, fruit and yoghurt to breads, pastries, eggs and meats.

They even had smoked salmon which isn’t often found at European breakfast buffets so I thoroughly enjoyed piling my plate high with scrambled eggs and salmon and I’m pretty sure I was the one who gobbled up all the salmon every day! This is also where Evie got her love for Babybel cheeses and now whenever she hears me opening the fridge at home she’s running straight up behind me trying to pinch a Babybel out!

Spy her little hand reaching for the Babybel!

No mum I didn’t touch it!

This is the sort of accommodation that I love coming across when I travel. Not only was the location perfect giving me more of a local feel to Munich but the staff were super friendly and helpful, giving me a hand with everything from bringing a highchair up to our room, giving me directions and tips to the city and helping me carry my luggage and the pram outside when we left. There was even a large antique cabinet in the lobby full of little toy bears and rubber ducks dressed in German attire that kept Evie very entertained while I sat on the couches with a drink. 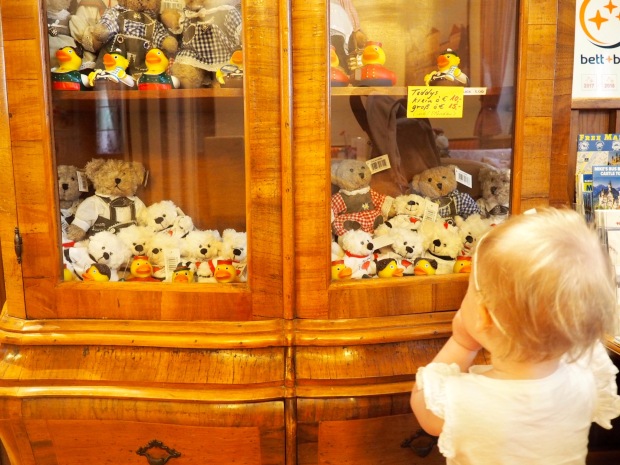 This would be a fantastic place to stay whether you have children with you or not but for me, travelling alone with Evie, which was occasionally just a little bit stressful, I really felt at ease here and we both especially felt at home. I couldn’t have asked for anything more.

Thank you to Sebastian and his family who hosted our stay at Hotel Laimer Hof. We had a fabulous time with you and if we ever return to Munich (and I really hope we do!) we would love to stay with you again.

Where is the most family friendly accommodation you’ve stayed? Where have you felt most at home? Let me know in the comments below or at:

14 thoughts on “Hotel Laimer Hof: The Most Family Friendly Stay in Munich”